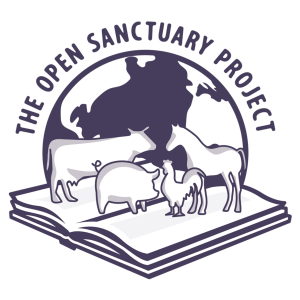 Education and outreach programs are critical components of many farmed animal sanctuaries’ missions and operations, and for good reason. The number of farmed animals who find safe homes at sanctuaries worldwide is nowhere close to the number of animals who find themselves in non-compassionate or dangerous situations. By publicly sharing the stories of sanctuary residents and the plight of those like them, sanctuary education and outreach initiatives provide unique opportunities for folks to (re)consider their daily lifestyle choices and commit to practices that could help spare more animals from exploitation, including the vitally important practice of supporting farmed animal sanctuaries in their mission to provide lifelong compassionate care to rescued animals. Although sanctuary education and outreach programs are generally successful in initially garnering support from sympathetic members of the public who’ve just visited their space in some way, maintaining ongoing support requires that sanctuaries continually (re)commit to sharing information with them that is accurate and transparent.

A Sanctuary’s Ongoing Support and Good Reputation Depend on Honesty

By virtue of their non-profit nature (whether formally incorporated or not), animal sanctuaries that rely on the public for support must maintain a positive perception in their community so that individuals feel good about supporting the sanctuary in various ways, including through financial or in-kind donations, volunteerism, social amplification, and more. Often, animal sanctuaries are given the benefit of the doubt that they are highly regarded by the public. After all, the well-being of the residents is usually evident to visitors who see them, and engaging social media posts are quick to demonstrate the ostensibly great things happening at many sanctuaries.

However, if an animal sanctuary is found to be spreading inaccurate information or false stories, either about individual residents, their care, and their history, or agriculture more generally, the response from the community could potentially cause a cascade of backlash that may even threaten the continued operation of the organization, depending on how significant the inaccuracy was. False claims could even lead to legal retribution by organizations or individuals who feel like they’ve been maligned by an animal sanctuary sharing critical facts that turn out to be less-than-factual.

As a short example, if one of your residents did not come from a factory farm, do not imply that they did. That resident has their own, equally enlightening story to tell, perhaps about a different, less commonly considered form of harm against their species. It’s also more than likely that there are other similar individuals in your care who came from factory farms and whose stories you can share without stretching the truth.

As another example, if your sanctuary was not significantly involved in the rescue effort of a current resident, do not position your organization’s role in an inaccurate light. Commitment to lifelong compassionate care is an admirable undertaking, and does not need additional embellishment that could permanently sour relations between sanctuaries and supportive community members.

While not a horribly pervasive issue, there have been a number of prominent occasions when farmed animal sanctuaries and animal rescues have been caught providing false information to the public. Beyond the damage caused to the individual organizations, each of these occurrences might also have contributed to skepticism towards the farmed animal sanctuary movement more generally. For this reason, every sanctuary should commit to providing the public with information that is honest and accurate whenever possible.

Accuracy and Transparency Around Resident Care: Think About What You Share (And Don’t)

When you share stories about residents, especially if you’re raising funds specifically for them, providing accurate and transparent follow-ups to those who donated to the cause is an important component of donor stewardship. Even if things didn’t go as you had hoped, when the public receives honest updates on how things turn out, they are more likely to trust your organization due to your willingness to be upfront. If, for instance, a resident needed a critical operation and ended up passing away in surgery, an organization should be honest about what happened and why. A sanctuary risks losing the public’s trust if somebody outside of the organization reveals unhappy news about a beloved resident that was seemingly hidden from view.

Sanctuaries should also give honest updates if well-publicized compassionate care solutions turn out to not be as effective for you as you had originally portrayed. Sanctuaries and compassionate caregivers worldwide often get unsolicited care advice from members of the public who see a care or organizational solution proudly displayed by a different sanctuary’s social media page without the fuller picture of the potential downsides, side-effects, or later modifications to these novel fixes and situations. This happens occasionally online in the case of larger residents with disabilities who are outfitted with sleek mobility devices that sometimes end up causing as many health issues as caregivers had hoped to solve. This isn’t to say that these devices do not work. Rather, prosthetic solutions can be successful, but they often require a lot of time, modifications, and ongoing work before lasting progress is achieved. These are processes that are not always easily communicated in the soundbyte of a social media post.

Asking For A Friend

If you’re looking for a sanctuary solution for your organization or residents and see one promoted by another sanctuary, get in touch with the sanctuary’s staff and ask them for more information! Or, ask us to ask around! Most sanctuaries are more than happy to share what works and what doesn’t with other compassionate organizations. Often, there’s quite a bit more nuance and considerations to solutions to complicated issues than what gets shared on the internet.

Although it’s important to give updates and accurate accounts of the goings on at your sanctuary, you shouldn’t feel obliged to share everything that happens at your organization. A sanctuary should always be mindful of what should be shared and what might be best left a private matter. For instance, some basic healthcare of residents like pig hoof trimming might appear to be less than compassionate to those unaware of the process, and could cause more misunderstanding than enlightenment if displayed to the public without context.

Another example of when it may be wise to withhold information from the public is if you receive residents as a function of law enforcement-related actions, such as seizures in cruelty cases. Keeping intakes of this type private, at least until any relevant legal proceedings are concluded, help protect your residents and the integrity of such proceedings.

Accuracy Around Animal Agriculture: The Facts Speak For Themselves

The realities of animal agriculture are often overwhelming and quite grim, especially to people in the farmed animal sanctuary movement who work with the affected species each day. The staggering scale of the issues involved are stark and need no embellishment, so there is no reason to exaggerate any numbers or standard practices in animal agriculture. In fact, providing incorrect or inaccurate information during education and outreach efforts can put a sanctuary at significant risk of losing public support or the attention of more skeptical visitors who might already be looking for a reason to mistrust their message and discredit their mission.

As part of their education and outreach efforts, a lot of sanctuaries enjoy promoting alternatives to animal products and animal exploitation. If your sanctuary chooses to do this, it’s critically important that the information you provide on these alternatives be as truthful and accurate as possible, especially if it pertains to human health. For example, if a sanctuary representative is promoting an alternative product based on contested or purely anecdotal data, they should be sure to present it as a personal endorsement rather than the sanctuary’s position. Similar to sharing inaccurate facts about animal agriculture, making inaccurate claims about alternative products and practices can alienate folks who need to hear a sanctuary’s compassionate message the most.

One way to ensure your sanctuary’s representatives are sharing accurate information with your visitors is to provide them with literature from reliable sources. There are many organizations putting out highly vetted information, both about animal agriculture and compassionate alternatives to animal products and daily lifestyle choices, in affordable, well-produced brochures and booklets that visitors can peruse and share with their communities. Vegfund offers a grant that your sanctuary could potentially put towards obtaining great materials for your education and outreach programs!

Many individuals have a very limited understanding of the costs involved in lifelong compassionate care and sanctuary operations, so providing a clear account of your organization’s finances also allows your sanctuary to build and maintain a stronger and more trustworthy relationship with the public. For example, if you are raising funds for a particular use at your sanctuary, it’s important to tell your supporters where those funds are specifically going, especially if it is a large amount. In addition, all 501(c)(3) nonprofits in the United States must publicly disclose their Form 990 (income and expenses). Making this form easy for the public to find and view with clear explanations can also help foster more trust in your organization. Some organizations also post their significant veterinary expenses directly on their website. While this level of disclosure is not required, it is one model of providing transparency to anyone who wants to know where their dollar might go. Yet another way of publicly demonstrating your sanctuary’s commitment to financial transparency is by obtaining Guidestar’s Seal of Transparency and displaying it on your sanctuary’s website. If you’re already committed to honest financial disclosure, getting the seal is simple.

Ultimately, the farmed animal sanctuary movement depends on each and every organization’s commitment to a high standard of providing accurate information and being as transparent as possible in order to maintain its integrity and positive perception as a whole. We hope this resource helps farmed animal sanctuaries and rescues consider the various ways they can commit to these critical practices and responsibilities.

Spaying and neutering is a crucial tool in pig healthcare to help them live long, healthy lives.
General Care For All Species
Animal Sanctuary Resident Record Keeping Basics
What you need to keep organized and documented about all your residents at an animal sanctuary
Program Planning And Evaluation
Animal Sanctuary Visitor Surveys: How To Capture The Data That Counts
Why are surveys are an important tool? How can you most effectively capture the right data for your animal...
Recordkeeping And Accountability
How To Set Up A Free And Secure Record Keeping System For Your Animal Sanctuary
How to set up the free Open Sanctuary Project Sanctuary Resident Record Keeper system!