Home » Fundamentals » The Pecking Order: How Does It Affect Flocks?

The Pecking Order: How Does It Affect Flocks? 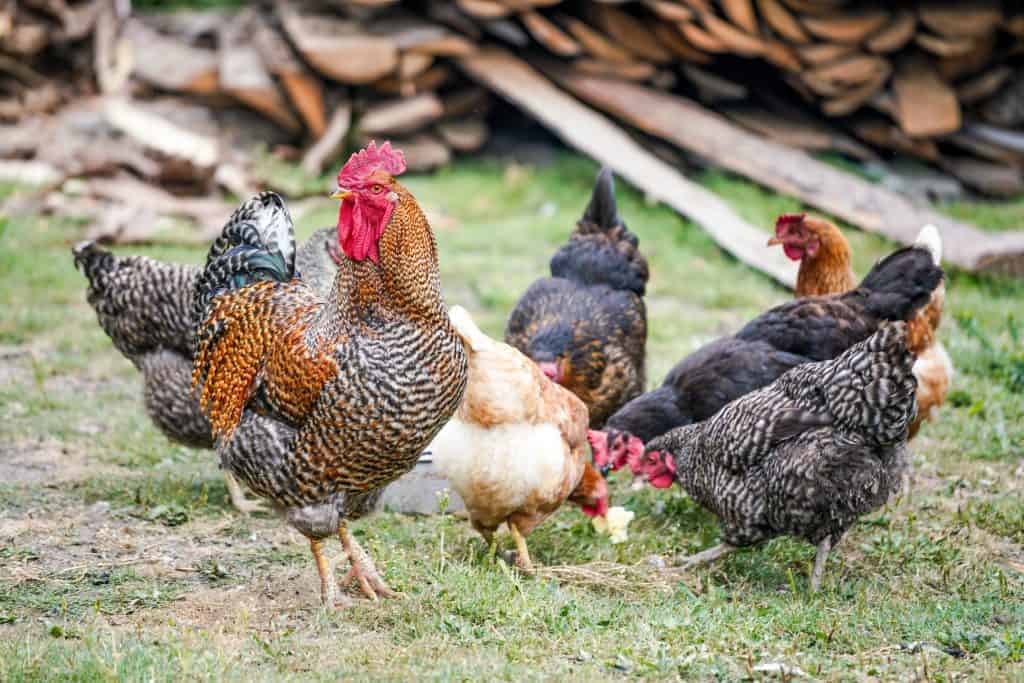 If you spend time with a flock of chickens, you’ll pretty quickly notice that someone’s the boss, and someone’s at the bottom of the ladder, with a lot of folks in between. Like many social animals, chickens are born with the desire to create and sustain a hierarchy, known [sometimes quite accurately!] as the “pecking order” in the chicken’s case. They begin to sort out who’s in charge when they’re barely out of their shells, bumping, chasing, and pecking at other chicks at feeding time and in their roosts. Eventually, a peaceful order is established and everyone generally knows their place.

The pecking order touches most aspects of a chicken’s life, including their drinking, feeding, egg laying, crowing, roosting, mating, and even bathing!

Pecking order positions are formed when a flock member confronts another, or if they confront a group. Whoever backs down falls in the pecking order. If both chickens are willing to fight it out, there might be a rough outcome. A chicken fight could end after a short tussle with a few feathers lost, but it could also be a dire battle that could risk blood, eye damage, and even possibly a loss of life. More typically, dominance is established with puffed up hackle feathers, chasing, loud wing flapping, and what’s known as the wing dance (you might know it as the chicken dance- cue the polka!). If a chicken dances around another who then runs away, they’ve just made their way up the pecking order.

Once in place, pecking orders tend to remain mostly stable, though adding or removing flock members can disrupt the order and it’s normal for lower flock members to tussle their way towards higher status. If it seems like there’s constant infighting over a large flock’s pecking order, it’s possible that you’re overcrowding your residents. Scarcity of resources and space stresses out everyone, and usually results in extra pecking. Make sure to give your chicken residents ample room- at minimum you need to provide five square feet of indoor floor space per bird for non-large breed chickens and at least eight square feet for large breed chickens!

If a chicken is sick or injured, other chickens will likely take advantage of their diminished health to gain status, sometimes en masse, sometimes through violent or even deadly means. For instance, when a chicken bleeds, others have been known to take particularly vicious advantage against them, pecking at and exacerbating the wound. For this reason, it’s very important to keep track of your birds’ health and separate chickens in need of sanctuary from the flock. Once healed, you’ll likely have to reintroduce them in the same way you’d introduce a new bird to your flock.

Life At The Top

At the top of the pecking order you’ll find the strong-willed alpha chicken, sometimes known as the top chook. The top chook (and other birds far up in the pecking order) gets many benefits such as prime positioning for all flock activities including eating and drinking, even kicking lower birds out of nesting boxes and roosting positions that they’d prefer. If another chicken oversteps their boundaries, a quick peck from the top chook may remind them where they stand. These privileges come with the responsibility of flock guardian, as they are charged with watching for predators and searching for treats. They can also break up fights and care for other birds. As your top chook ages, a younger, more virile bird may steal the mantle and put your previous leader in the second position.

If a flock contains a single rooster, he’s most likely going to be the top chook. In flocks where there’s more than one rooster, they’re most likely going to duke it out for the top position unless one is much more docile. An alpha rooster will get preferential mating status, with lower roosters typically refraining from crowing or mating when the boss is around.

Middle Of The Pack

By pecking order standards, most birds are in the middle. There is subtle interplay of privileges depending on their rank, but you’ll find that these birds tend to keep their head down and wait their turn for the various flock activities. Some are loners, others hang out with similarly ranked friends. Sometimes there will be brief confrontations to jostle for positions within the middle, but it’s mostly a pretty good place to be a chicken as they have few responsibilities without much harassment from anyone. Surprisingly, if you’re dealing with a chicken bully, they tend to be found in the middle of the pecking order.

By virtue of the nature of hierarchies, someone has to be on the bottom. This chicken could be the most submissive, shy, or skittish, or they could be a victim of consistent pecks from other chickens. They might get last dibs on food, water, treats, and nesting preferences. They tend to try to blend in with the rest of the flock while avoiding high tier chickens, which usually keeps them safe. As a benefit, nobody’s going to fight them for the bottom rank, but they are likely going to endure quite a bit of extra pecking and bullying, which may require your intervention. To protect your bottom bird, make sure to provide them with escape routes and accessible hiding spots.

A New Bird Enters The Fray

If you’re introducing a new bird to an existing flock, you have to make sure to let your chickens meet them gradually in order to minimize the risk of serious injury. Consider allowing your flock to see the new bird, but without physical access, for up to two weeks. This can allow them to all get acquainted without the stress of fighting over resources. Once you’ve given them some time, make sure that you provide lots of hiding places, extra food and water, and more roost areas in their home to minimize introductory friction. Also consider re-arranging their home when they’re outside to put everyone on an even playing field when they get indoors. Supervise their first few days together to ensure that nobody is being bullied too dangerously, but be aware that there’s probably going to be some tussling as your birds re-orient the pecking order. If you have to, let the new bird sleep in their own space overnight to keep them safe and try re-introducing them another day.

Where Are You In The Pecking Order?

Whether feathered or not, if you provide care to chickens, you are likely ranked on the pecking order as well! Usually, chickens will give you an honorary position as their guardian (or at least their food-provider), but there are instances where a chicken (especially a rooster) might decide to challenge you for the top spot. In this case, you’ll have to decide whether you want to stand your ground. Walking (or running) away from a chicken could embolden them to continue this behavior, but as a sanctuary is their home, you may decide that it’s okay to not be at the top. Make sure that you visit your flock regularly to get to know who sits where on the pecking order, and who’s likely to start problems that you can prevent far in advance.

As a note, upper pecking order chickens may be more bold or aggressive towards humans, especially desiring to protect the flock from curious children who get too close too quickly. If you’re going to let humans around your birds, be aware that these birds might not be the best candidates for hanging around younger humans.

If you notice a perennial chicken bully, or if your flock gets a bit too violent, especially singling out the lowest-ranked member of the group, it may be time for a chicken time-out.

Bloodshed especially requires an intervention. Separate the aggressor and victim and dress any wounds. Do not allow a bloody chicken to be with others!

If you separate the bully for a few days, they will lose their standing in the order and this loss of station will likely resolve their bullying behavior. If you have a group of chicken bullies, separate them all individually and re-introduce them on separate occasions to break their habit. If this chicken refuses to play nice, you may have to figure out a different housing arrangement to keep your flock safe.

It may seem sometimes like pecking orders result in poor outcomes for some of your birds, and you may want to step in quite frequently so your birds play nice, but for the most part, the pecking order is an effective social tool for keeping your flock peaceful and safe. Just don’t let their social ladder descend into Lord of the Flies territory!

Chickens In Charge: A Guide To The Pecking Order | Backyard ChickenThe raising of chickens primarily for the consumption of their eggs and/or flesh, typically in a non-agricultural environment. Coops (Non-Compassionate Source)

Should I Intervene Or Let The Pecking Order Do Its Thing? | Backyard Chickens (Non-Compassionate Source)

Spaying and neutering is a crucial tool in pig healthcare to help them live long, healthy lives.
Fundamentals
Pigs and Mud: Let them Wallow!
Why pigs love mud and how to maintain a safe environment for them!
Fundamentals
Chicken Living Space Maintenance and Cleaning
How to keep a chicken's home clean!
Fundamentals
Daily Diet, Treats and Supplements for Chickens
What do chickens need to eat (and need to avoid eating) to be happy and healthy?